These three terms are not fully recognized in major dictionaries, although they are quite common in our daily conversations. Both VR and AR, but not MR, have been explained in both the Oxford and Cambridge Dictionaries (the online version). Here are quotations from Oxford Dictionary about VR and AR.

“Virtual reality: The computer-generated simulation of a three-dimensional image or environment that can be interacted with in a seemingly real or physical way by a person using special electronic equipment, such as a helmet with a screen inside or gloves fitted with sensors.”, and, “Augmented reality: A technology that superimposes a computer-generated image on a user's view of the real world, thus providing a composite view.”

However, there have been various definitions and elaborations on these reality-related technologies in other fields of discipline (see appendix for examples).

Because dementia is not well understood by the general public, many organizations, charities, and academic societies have been advocating for an improved understanding of dementia. However, most people simply have literal or intellectual knowledge about dementia. Educational literature has proved that vicarious experiences are one of the most efficient ways to gain understanding and develop empathy, especially in the field of mental health. Since 2016, throughout the UK, Alzheimer’s Research UK (ARUK) has been developing a project entitled “A Walk through Dementia”, in which virtual reality technology has been implemented as a practical tool to aid the understanding of dementia. Detailed information can be found at the official website (http://www.awalkthroughdementia.org). With commercial VR devices, a cardboard headset (see Figures 1 & 2) available from ARUK, or even simply watching on mobile phones or tablets, users can download the App software and programs, and experience life in a way that more closely reflects the life of dementia patients. It is highly recommended that caregivers for dementia patients use VR to have this experience.

VR, AR and MR may have potential clinical use in geriatric mental health in the future. The following websites and articles in this column share more information about the ongoing development and applications of these technologies and feedback is sincerely welcomed.

Appendix:
The exampled websites addressing the explanations of AR, VR and MR. 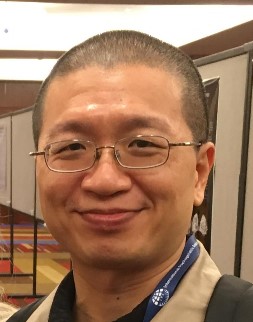 Dr. Yung-Jen Yang is an experienced senior geriatric psychiatrist at the Tsaotun Psychiatric Center in Middle Taiwan. Currently he is a member of Board of Director of the Taiwanese Society of Geriatric Psychiatry and a lifetime member of the IPA. He has special interests in long-term care and new technology.