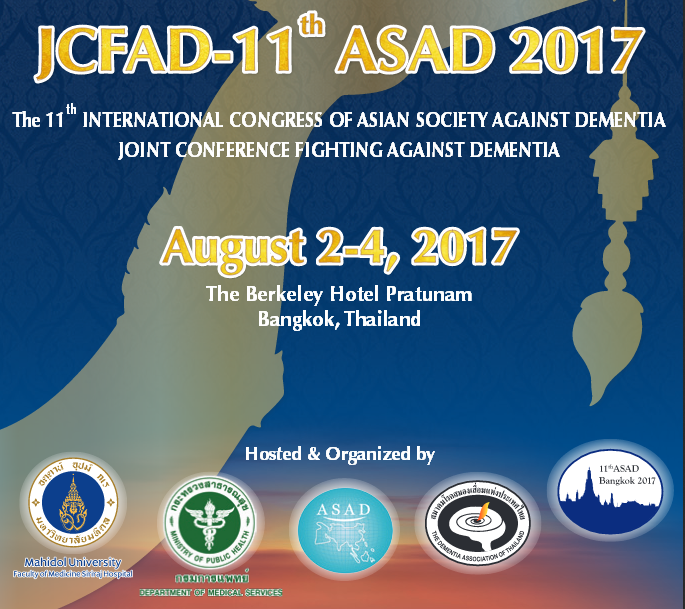 The Asian Society Against Dementia (ASAD) was established in 2007. Historically, ASAD is a successor of the International Working Group on Harmonization of Dementia Drug Guidelines (IWGH), which decided to move its activities and interests toward Asia and held IWGH Asian Congresses. Since 2007, ASAD has been held annually at the 10 most fascinating places in Asia.  The 11th International Congress of the Asian Society Against Dementia (ASAD) was held in Bangkok, Thailand in 2 – 4 August, 2017. There were 550 registered participants of diverse disciplines (i.e., psychiatry, neurology, psychology, nursing, social work) from more than 15 Asian countries.

Bangkok had been hot and highly humid because of rainy season, which made participants inevitably stay in the air-conditioned lecture rooms. Topics of lectures and presentations were very interesting and diverse, including dementia (Alzheimer’s disease, vascular dementia, CADASIL, fronto-temporal dementia, dementia with Lewy bodies, behavioral and psychological symptoms of dementia), depression, delirium, and suicide as well as epidemiology, genetics, imaging (i.e., PET, amyloid and DOPA), dementia care (day care, comprehensive care, long-community support service, long term care insurance scheme), driving and so on. All board members of ASAD were freely invited as guests and volunteered for lectures, and others were invited from Asia, Europe (i.e., England, the Netherlands, Sweden, Germany) and the US.

The programs were systemically organized to make participants learn easily. For example, morning sessions of 3 August 2017 were planned around frontotemporal dementia (FTD), from basic knowledge to frontline research findings. Rising interest in this relatively rare form of dementia was evident from a greater number of participating dementia professionals than ever before. In a parallel symposium entitled “Early onset dementia (EOD)”, 3 lecturers from Japan, Korea and Singapore presented their clinical experiences, showing diverse cases of early onset dementia, and sharing insights about FTD as well as the genetics of EOD. In his plenary lecture entitled “Precision medicine in FTD,” Martin Rossor (UK) presented several video cases of different FTD patients, which reminded dementia professionals of their own  patients and clearly recognized true cases of FTD. In the next plenary lecture, entitled “New horizons in posterior cortical atrophy,” Sebastian Crutch (UK) also presented frontline research findings of genetic aspects of posterior cortical atrophy. Six lecturers provided comprehensive understanding of FTD, raised awareness of what FTD is, shared how to diagnose FTD in their own clinical settings, and advocated for urgent and necessary frontline research.

Excerpted article as reprint from IPA's newsletter, the IPA Bulletin, Volume 34, Number 3
IPA Members can read the full issue on the members' site.