Diagnostic criteria for definite autoimmune limbic encephalitis (Graus F et al. Lancet Neurol 2016). All four of the following criteria must be met ( if one of the first three criteria is not met , diagnosis of definite limbic encephalities can be made only with the detection of antibodies against cell-surface, synaptic or onconeuronal proteins):

BACKGROUND:
The diagnostic approach of patients referring for initial memory impairment and neurocognitive decline includes a complete series of clinical, biochemical, neuroradiological, and biomarkers evaluations in order to differentiate potentially reversible and treatable conditions from other chronic neurodegenerative diseases, such as Alzheimer’s, Lewy body, Parkinson’s, and vascular dementia. In particular, time of onset and progression of symptoms should guide clinicians to rule out acute and rapidly progressive forms of dementia, such as Creuzfeld Jakob disease or infective, inflammatory, and autoimmune encephalitis. Among the latter, limbic encephalitis is a lesser-known inflammatory condition localized to structures of the limbic system presenting with mood and behavioral changes, short-term memory impairment and cognitive dysfunction.

CASE PRESENTATION:
A 76-year old man with a medical history of hypertension and dyslipidemia was referred to ambulatory neuropsychological assessment because of recent onset of subjective short-term memory loss, which did not interfere with daily living activities. The brain CT scan at first evaluation showed signs of chronic vascular encephalopathy. Neuropsychological assessment showed uncertainty in orientation to time, as well as low but still normal results in learning profile and language comprehension, whereas a normal performance was observed in all other functions (attention, processing speed, reasoning, and problem-solving, spatial, and language production). Four months after initial assessment the patients was admitted to the neurologic department for acute confusional state. This time Magnetic Resonance Imaging (MRI) of the brain was performed demonstrating areas of high signal changes in the medial temporal lobes bilaterally on FLAIR sequences (see images). 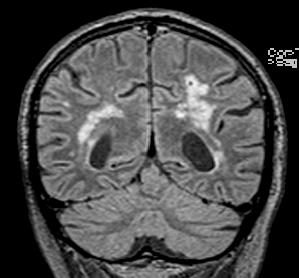 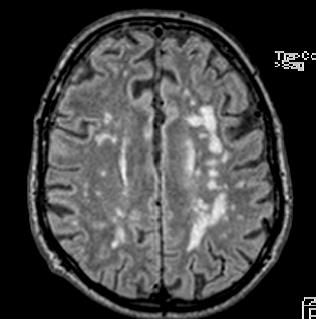 Additional tests for rapidly progressive dementia were performed, including paraneoplastic and anti-neuronal antibodies, screening for viral meningoencephalities and cerebrospinal fluid (CSF) essay. The findings were suggestive for the diagnosis of limbic encephalitis, and the patient was treated with high-dose parenteral corticosteroids, followed by a tapering oral dose over a few months. He also underwent a tumor screening, which gave negative results. His condition ameliorated during treatment until full recovery.

DISCUSSION AND RAPID OVERVIEW OF LIMBIC ENCEPHALITIS:
Limbic encephalitis is a lesser-known acute or subacute inflammatory condition localized to structures of the limbic system (hippocampus, amygdala, hypothalamus, cingulate gyrus, limbic cortex) that might be of paraneoplastic origin but also due to other autoimmune conditions.

Typical EEG findings include slowing or epileptiform activity that is maximal in the temporal regions. MRI may show on T2 fluid attenuated inversion recovery FLAIR sequences hyperintensity in the mesial temporal lobes. Autoantibodies varies according to tumor type and are to be found in serum and CSF. Autoimmune encephalitis is associated with antibodies to neuronal cell surface/synaptic proteins.

Diagnostic criteria for definite autoimmune limbic encephalitis are shown in the highlight box.

TREATMENT AND OUTCOME:
Treatment options include immunosuppression and tumor resection for paraneoplastic forms, while if untreated, limbic encephalitis can lead to progressive neurologic deterioration and death. Spontaneous recovery, however, has also been described. First-line immunosuppressive treatment includes parenteral corticosteroids, intravenous immunoglobulin, and plasma exchange, according to individual case. As a second-line therapy, other immunosuppressive agents such as Rituximab and Cyclophosphamide may be considered.

There is a variable but favorable response to treatment for autoimmune encephalitis, ranging from complete recovery to permanent neurologic sequelae and death, whereas the prognosis for paraneoplastic forms depends on the underlying tumor. 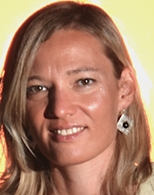 Laura Valzolgher, MD, works at the Memory Clinic at the Geriatric Department of Bolzano Hospital, Italy. She is currently completing a Master of Science Degree in Psychogeriatrics at University La Sapienza Rome.