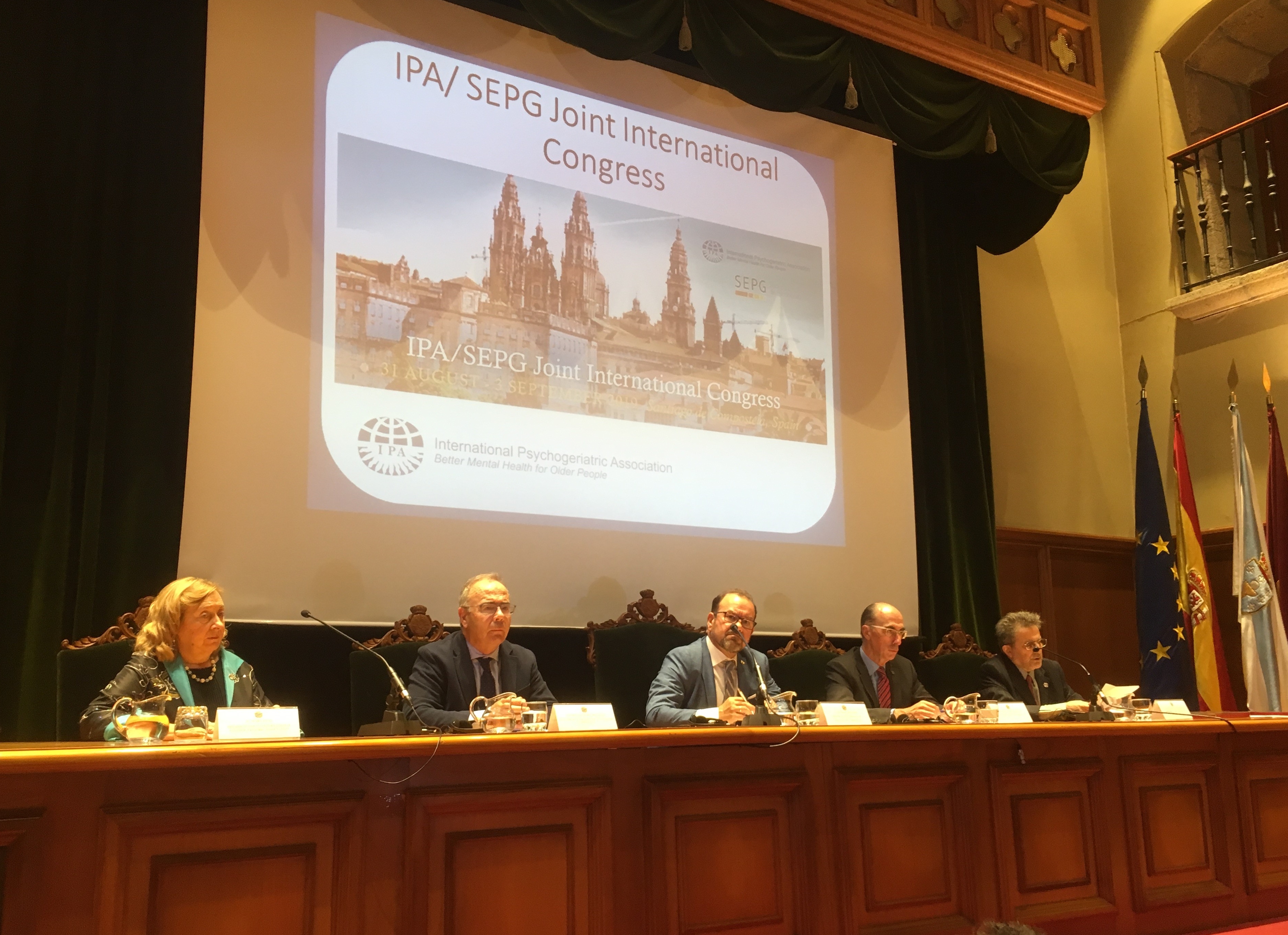 My first words must be words of GRATITUDE.

First of all, I must thank the colleagues of the IPA Board of Directors who trusted in my capability to organize this congress.

And, as I did in 2010, when I also had the honour and the challenge of organizing the International Meeting of the IPA, I have to make a special thanks, because it has been noticed during the congress organization, and it has again been noticed yesterday, during the Board of Directors meeting, when we met to reflect on the immediate future of the IPA:
With all due respect of my reverent agnosticism, thank you, Lord Santiago, for your support, because without it, I do not think it would have been possible in the current times to bring to Santiago de Compostela about 500 professionals from all parts of the world to discuss the issues that concern us.

SECONDLY, after a quarter of a century has passed since we launched the first interdisciplinary psychogeriatric unit of Galicia, we cannot avoid to make a brief evaluation of its meaning. The Autonomous Community of Galicia was a pioneer in Spain, following in the footsteps of Catalonia, it was pioneer I say, in creating specific services to address the peculiarities of older people with mental disorders. Since then, there are obvious changes, including:

Both phenomena continue to grow fast. Unfortunately, the provision of health and social services for this group of the population does not progress at that rate. In the consensus documents led by the World Psychiatry Association and WHO, at the turn of the millennium, that outlined the principles of psychogeriatric care, it was indicated that an objective of these documents was to promote debate and urge to the health and social authorities of the relevant countries to take appropriate measures to resolve existing deficiencies. We have tried to fulfil this professional and moral obligation in all the ways we have known, and I have to take advantage of this act to make a call for a collective reflection. The society as a whole has to reflect on the phenomenon of aging and its consequences, the immediate future in many of the countries that are represented in this congress, but the PRESENT for some countries, among which we are.

Recalling the consensus document of the World Psychiatric Association (and I have to recall that in all these documents the IPA actively participated), it gathered that the best way to avoid discrimination and abuse of older people with mental disorders, was to provide good services that meet their needs of physical, psychological and social nature - and the needs of their carers.

I am a medical doctor, and when a doctor indicates what needs to be done, he has to assume that the audience may think, "doctor, heal yourself." Therefore, I believe that health and educational institutions have to set an example of their respect and appreciation of the aging process. So, I wish to take advantage of this opportunity, before the highest health and education authorities of Galicia,and state that the respect for the elderly, which goes through due attention to their health, psychological and social needs, is the touchstone of the ethical and moral development of a society. This is a task to which we all must contribute, and that our authorities should lead. When I sincerely thank for the support to the organization of this congress, I have to request that this support be maintained, both in the future development of training programs that help to understand, all health professionals, the importance of the aging process in which we are living, as in the provision of adequate care services for the elderly with mental disorders. Needless to say, for such projects, our enthusiasm and dedication will be even greater than that which we have shown organizing this event.

To conclude my intervention, I would like to thank a group especially close to me: my colleagues from the executive and the Board of Directors of the IPA. I started my responsibilities on the Board in 2003, later I became Secretary of the IPA and then President. In this congress, my role of Inmediate Pass President of IPA will come to an end. With deep emotion I thank you for allowing me to work, side-by-side, with professionals of your stature.

I should not extend myself in this act of protocol, I cannot analyze the high importance of the many issues addressed in the congress, some of which have already been pointed out by the media along the last weeks. I ask everyone to echo all these issues, to disseminate them, to transmit this information in order to really contribute to the mission of the International Psychogeriatric Association: Improving the mental health of the older people.

Once again, thank you all very much!
Raimundo Mateos