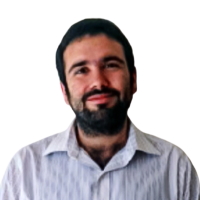 Since completing his Psychiatry residence, Dr León has evolved from a general mental health practice to an exclusive focus on psychogeriatrics and dementia. He has worked most of his career in old age mental health, first coordinating psychogeriatric teams. Currently he works in one of the first Memory Units in Chile as part of the National Plan of Dementia.

Dr León is a member of the Latin America and the Caribbean Consortium on Dementia. Together they have created local research and influenced stakeholders into harmonizing diagnosis and treatment tools.

Dr León became a lifetime member of IPA from 2017, and since 2020 he has been an active member, participating in several committees. In 2020, Dr León was named one of the IPA’s Early Career Research Network chairs.

In September 2020, Dr León was named an Atlantic Fellow for Equity in Brain Health of the Global Brain Health Institute, based at the Trinity College Institute of Neuroscience in Dublin, Ireland. During this fellowship, he has learned even more about dementia and old age psychiatry and the importance of health policy, networking and being a leader in health groups.

Dr León has a publication record of over ten publications from different areas of knowledge, including ethical, psychological, biological, social, political and pharmacological research. He believes that a researcher should be integral and be able to participate in several study areas.

Teaching about old age psychiatry is a fundamental part of his career since he believes that more training in old age mental health is required in general doctors and specialists. It is for this reason that he helped create several rotations for geriatricians, psychiatrists, neurologists, GP's and psychologists, doing practical supervision and lectures. Moreover, he has dictated classes to undergraduates and postgraduate, and has also co-written two books about dementia and psychogeriatrics.

Finally, aiming to increase the awareness in the general population, he has performed several open talks to raise awareness on old age mental health and dementia. Dr León created and managed the Memory Unit’s social media, which has allowed for further sharing of information, community-friendly videos, and live streaming with over ten thousand people.